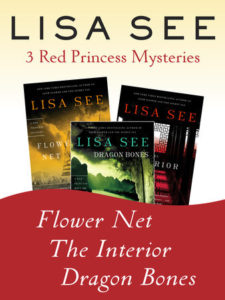 I read a lot of historical mystery books, but I got really tired of the same protagonist – a white widow of means. So when looking for a mystery with a non-white heroine, I came across Lisa See’s Red Princess Mysteries. While it isn’t exactly a historical series, the Red Princess Mysteries is a solid  trilogy with a much more interesting setting than most mysteries on the market today. Don’t forget to read my interview with Lisa See about this series here.

About The Red Princess Mysteries:

In the waning days of Deng Xiaoping’s reign, the U.S. ambassador’s son is found entombed in a frozen lake. Off the coast of California, Assistant U.S. Attorney David Stark discovers the corpse of a Red Prince, a scion of China’s political elite. With the Chinese and American governments joining forces to see justice done, David teams up with unorthodox police detective Liu Hulan in Beijing. As their investigation sparks an intense connection, David and Hulan uncover a web linking human trafficking to the drug trade and to governmental treachery—a web reaching from the Forbidden City to Los Angeles and, like the wide flower net used by Chinese fishermen, threatening to ensnare all within its reach.

As David Stark opens a law office in Beijing, Liu Hulan receives an urgent message imploring her to investigate the death of an old friend’s daughter, who worked for a toy company about to be sold to a new client of David’s. Despite his protests, Hulan goes undercover at the toy factory in a rural village deep in the heart of China, a place that forces her to face a past she has long been running from. Suddenly Hulan and David find themselves on opposing sides: one trying to expose a rogue company, the other bound to protect his client. As pressures mount, they uncover universal truths about good and evil, right and wrong—and the sometimes subtle lines that distinguish them.

Liu Hulan and David Stark are traveling to one of the most beautiful places on earth: the Three Gorges, where China’s biggest engineering project since the Great Wall is taking place. Hulan is there to investigate the death of an American archaeologist found in the Yangzi River; David is trying to figure out who’s stealing artifacts and selling them on the international art market. Haunting the investigation is the possibility that an artifact has been found that could very well alter the history of civilization. Together, David and Hulan unearth more scandals and revive tragic memories as they struggle to solve a mystery as big, unruly, and complex as China itself.

I really enjoyed these books. I read through all three of them fairly quickly. The mysteries are interesting and there are lots of twists and turns. There is also a lot of Chinese history and culture packed in. Even though these books are not “historical,” the first one was published in 2007, almost 18 years ago, so it is a great picture of China at that time. It is interesting to see the differences between China then and now, and almost frightening to see just how little has changed. I think the second book in the trilogy was the weakest mystery-wise (why anyone, especially Hulan, cares about the factory girls is never really clear. I mean, honestly, the “deplorable” conditions at the factory sounded better than the conditions at my daughter’s university today), but the character development is essential to the overall story and has significant impact on the trilogy’s conclusion.

If you are looking for an interesting China-based mystery series, definitely check out Lisa See’s Red Princess Mysteries.

Have you read The Red Princess Mysteries? What did you think of them> Let me know in the comments.